“The airplane became the first world wide web”, as Bill Gates once said. Today, IT and Industry are virtually converging. But what does that really mean for aerospace? And how are companies in this sector concretely coping with new chances, challenges and competitors? Together with Rebecca Blumenstein, Deputy Editor in Chief of Wall Street Journal, Airbus Group CEO Tom Enders will shed a light on these questions and unveil the Group´s latest digital initiatives in Silicon Valley and beyond.

Dr. Thomas (“Tom”) Enders was appointed Chief Executive Officer (CEO) of Airbus Group (EADS until January 1, 2014) on 1 June 2012, after having been CEO of Airbus since 2007. He has been a member of the Executive Committee of Airbus Group since its creation in 1999. But he wasn't speaking about Airbus in the beginning. The talk started with mentioning Elon Musk, the business magnate, engineer, inventor and investor. You might know him as co-founder of PayPal and now CEO of Tesla Motors. But 10 years ago he also founded SpaceX, an aerospace manufacturer and space transport services company. Every big player of the aerospace business now says, they don't take him serious at the time. Now SpaceX is disrupting the space business. Tom Enders said, they now have to thank Elon Musk for the big wake-up call for the business.

Everything is no becoming more competitive. A lot is changing right now. High networking people from Silicon Valley are joining the business and bring up a lot of highly innovative things, e.g. Google Wings and Facebook is experimenting with high flying drones and satellites. New players are taking over the business. Why not join this highly innovative playground? With A^3 (Acubed), a corporate venture funds, Airbus goes new ways. Tim Dombrowski, a former Partner at the venture capital firm Andreessen Horowitz, is the new CEO of Airbus Ventures and is committed to invest in promising, disruptive and innovative business opportunities generated around the globe and related to the Airbus Group’s fields of interest. The first big project is the so-called "Uber-Deal", where air transport is connected to ground transport in an integrated way. In the future it will be possible to order an helicopter via Uber app. 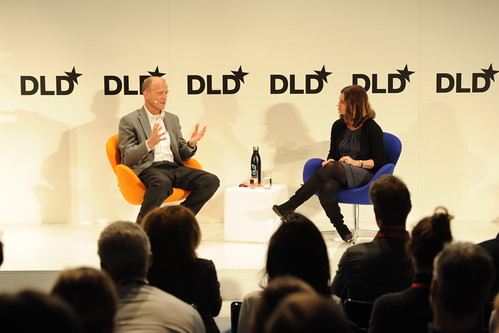 But more is coming soon, e.g. flying cars, Tom Enders was predicting on DLD's stage. We now have the precision of navigation systems and the computer power to make such things possible - but we need investors with less close control. Venture Funds based in Europe often has such hierarchic structure that slows down processes and people working in Silicon Valley need to get back to people in Europe with no clue, but will make decisions. It's neither innovative nor fast enough for such a highly innovative playground. That's why A^3 wants to make a difference. Starting with microfactories and communities all over the world, they hope to decrease developing costs and time-to-market for e.g. aeroplanes.

What will be a serious competitor? "Bet on somebody bet on the Chinese" - their air traffic increased a lot in the last couple of years and even the Iran could be one market of the future, not only because of old planes. Tom Enders discovered a huge engineering talent pool within the big country of Middle East. If Iran could be the market of the future, he predicts more stability to the region.

Overregulation in the EU is a highly discussed topic at DLD today and also on Tom Enders' talk with Rebecca Blumenstein. Larry Page once said if there could be another Google in Europe: "No way, Europe is too overregulated." That says it all, Tom Enders said. "Government has no business to do business".

Big data was also discussed. Tons and tons of data is generated every day, for example a flight from Munich to Barcelona generate 1TB of data. One single flight. The airplane system generated 20.000 parameters per flight approx. 30 years ago, now 450.000 parameters are transmitted. But only 0.1% of Big Data is really used. Tom Enders is aware of it and want to use those data to create new business models. What an exciting new future because of digitalization and related innovation!

The Sky Is Not the Limit (Tom Enders, CEO at Airbus Group & Rebecca Blumenstein, WSJ) | DLD16

Kim Polese: “To unlock AI’s true potential we need systems that can explain their decisions”

Entrepreneurship and the European Digital Ecosystem

Mobile and Tech in Emerging Markets

How to Make More Out of Less

Seeing Differently: Filling the Space Between the Real and Digital

On Mindfulness - A Conversation

What's Up WhatsApp? - Two Years After The Big Deal

A Technology Leap in Africa

Rocket: The Sky is the Limit

How social media is changing China and Asia

How the World will Change

Power To The European Founders

The Journey of the Digital Audi Customer

A tech community for climate change

What Will Matter for Media Tech in 2014 (Michael Wolf, Co-Founder & Director of Activate) | DLD14

DLDwomen 2010 - The Future of Media From a Female Perspective (Abraham, Öhrvall, Wu, Borchert)